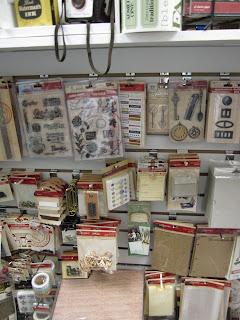 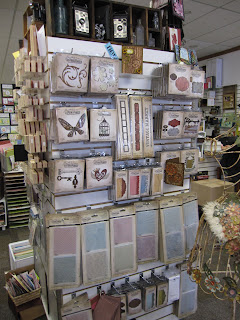 Recently traveled to Buffalo, New York for a family reunion and I discovered a wonderful rubber stamping store. The store had recently hosted Tim Holtz and they had a wonderful photo album with the event, the store was also filled with ALL of his Sizzix dies and embossing folders and of course stamps. I was like a kid in a candy store. My Mom (who does not understand) was ready to leave after a few minutes, wanted to banish her to the car but it was too hot outside to leave her out there for long(just kidding) anyway she endured for awhile and allowed my aunt and I to look around. The owner, Sharon was really nice, showed me around the store and told me all about the Tim Holtz event. She said when they announced that Tim was coming and classes were going on sale, they had women camped out in front of the store the night before, hoping to be first in line toreserves their space. Personally my husband would never allow this(he doesn't understand either) but I can truly understand the desire to be first in line to get a ticket to a Tim Holtz class. I am attending Stampaway in Cincinnati in a couple of weeks and I missed out on the opportunity to take his classes. My friend Gail did get a space so I will get to ooh and aah over her creations.
Posted by Lisa at 8:54 PM

Lisa
Greer, SC, United States
My name is Lisa Williams and I am hopelessly addicted to rubber stamping and buying supplies. I have been stamping for about 12 years. I was hooked by embossing. The sad thing is I hardly ever do it anymore.